This post has been a year in the making ! Actual art literally found on the street ! Street Art

2) A beautiful landscape painting was available for the taking. A book by Richard Branson and a broken vacuum cleaner could have been yours !
12/22/19

6) Now this one also includes a mirror that frames the original art itself. It also has some local appeal because that is an actual bank on Queen Street.
09/01/19

8) October was boon for ‘street art’. This looks like it might have come from someone’s bathroom. There’s an electrical extension cord as well as a rack included.
10/08/19

10) The motherlode of ‘street art’ happened back in April. I found a huge batch of discarded paintings outside a respite centre from what looked like a recent Art Battle. Art Battle is where artists are given 20 minutes to create a painting and then the audience votes for a winner.

On their website they say “All the paintings are then auctioned off to the audience members. Any painting that doesn’t reach its minimum bid is destroyed with a chainsaw.”
It took a few days but they gradually disappeared from this spot.
04/16/19

Several street artists have participated in this event in the past.

This year Meghan Kehoe of MCK studio will be competing during the Artist Project.

As well as Anya Mielniczek

It was so hard to chose just 10 for this series ! I was thinking of doing part 2 if this turns out to be popular ! 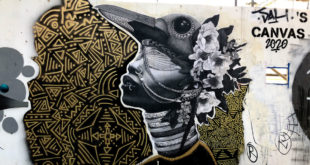 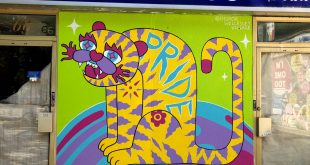