Along with everything else street art projects have been put on the shelf for now. There’s been a few murals organized by Kadence World which I still have to check out. But nothing official from the local arts organizations as they are staying home like the rest of us.

I did find some new alley graffiti that includes these street art finds.

A collaboration between Elicser Elliot & Water. This is down a long laneway that is called ‘Milky Way‘. It was done a few years ago and there’s a community garden there.. but a lot of the street art has peeled off of the walls. I was happy to see this new artwork – the only other one was by Buff Monster last year.

If you go across the street from the Elicser you will find these new pieces.

This I believe it’s a tribute piece to their friend who passed.

I don’t know who did this one.. I saw the guy working on it. Normally I would have said hello… but we are living in socially distance different times now.

Found this new-to-me turkey mural by Nick Sweetman and his friends that was done back in Mid-March.

He gives a really long explanation on his IG about turkeys which is kinda interesting:

Male turkeys have a fleshy wattle dangling from the top of their beak that I just learned is called a “snood,” easily the best new word I have heard in a while.
Most of the time when the turkey is relaxed, the snood is pale and 2–3 cm long. But when he starts strutting during courtship, the snood engorges with blood, becomes redder and longer, hanging well below the beak. It can be as long as 6 inches depending on his health and mood. No joke.
While fighting, turkeys will attack each others snoods, and domesticated turkeys sometimes have them cut off (called “desnooding”) to prevent these fights from turning cannibalistic.
Short snooded males defer to turkeys with longer snoods and females prefer long snooded males.

There was some guy taking pictures with a tripod when I was there and he wasn’t moving so it was hard to get a decent photo. Plus there was a car in front of part of the mural ! I’ll be back !

This wall is visible from the subway.. so it’s a great spot for art as a lot of people will see it every day.

Hope everyone is doing well and staying safe ! 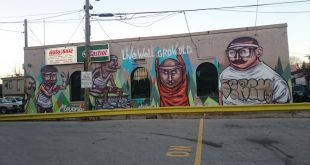 Elicser Elliott Street Artist From Wiki: Elliot’s most notable works can be described as a …