Huge Mural by Olaf Schneider on the outside of a shelter in Etobicoke. Its perfect for the location and features a nest being held up by the community 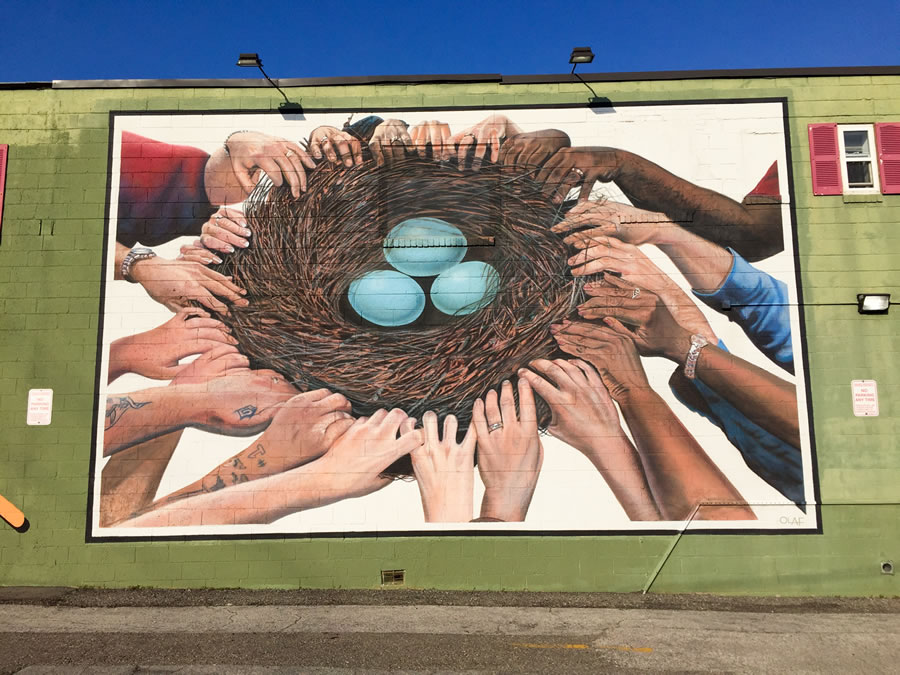 I went out of my element on Wednesday to get this window thing at Lowes (because they don’t have big box stores downtown – 😅).. .. Its in a part of town where Rob Ford (the deceased Mayor was from).. so, I don’t usually go through this area.. simply because its not accessible by foot and there isn’t much to see .. to be honest.. other than big box stores… .
.
After getting what I wanted.. I headed back to get a bus back to ‘civilization’ (downtown) and on my way back – I saw this amazing mural and stepped into a parking lot to take a photo.
.

After a google search .. I found out.. its on a wall for “Haven on the Queensway” a “charitable organization meeting the physical, emotional and spiritual needs of people in Toronto and surrounding communities”. They have a food bank and a clothing boutique in this actual building.
.

From their website it says that this location “was a popular Gentlemen’s Club, but in 2007 it was purchased, renovated, and reopened as Haven on the Queensway to serve the community in a much healthier manner” .

This mural is by @olafschneider its a phenomenal work of art 🎨.. a community holding the nest together.. Its actually one of the better murals that I have seen.. even in an unexpected location !
.
So, there you go… Street Art Really is Everywhere. ✨

Artwork mural captured at this Toronto location below: