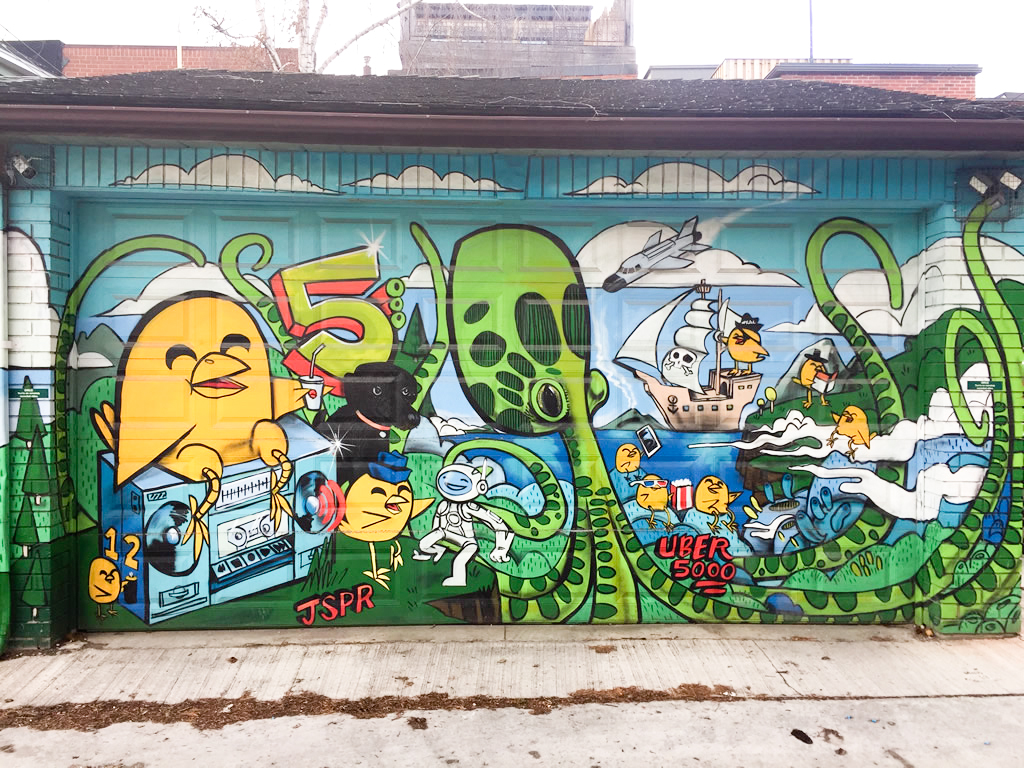 Found January 27th. Garage door mural by Uber5000 in a laneway in Harbord Village. Its down a alley that has a fair amount of artwork. They must have had issues with taggers. This mural really stands out. Its got all the artists characters incorporated into it including the signature birds and the dog. The middle of the door has an octopus 🐙 with an astronaut 👨‍🚀 and a pirate who is also a bird. The letters JSPR appear on the left handside of the door. 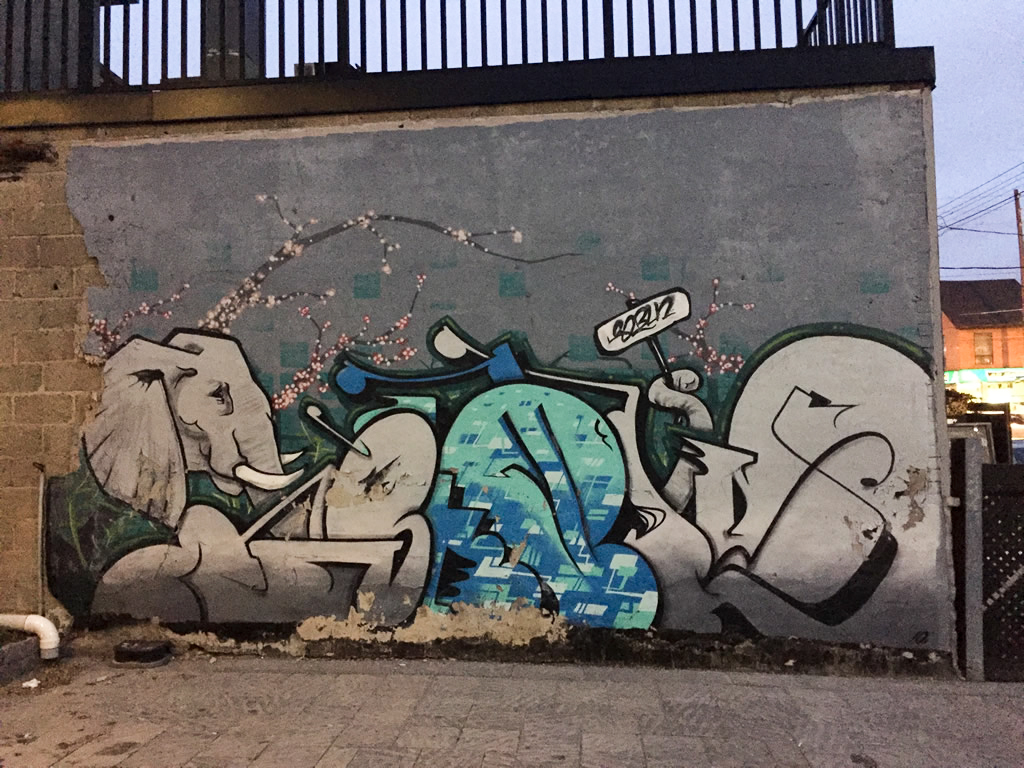 Found January 4th by unknown artist. 🐘 Its two elephants and one is holding up a sign. I can’t make up the writing on the sign. I might be the year ? 2012 ? Or it could be the signature.

I’m never sure what to make of some of these murals. They might be considered graffiti as there isn’t any credit on them. But someone spent a fair bit of time creating this artwork. 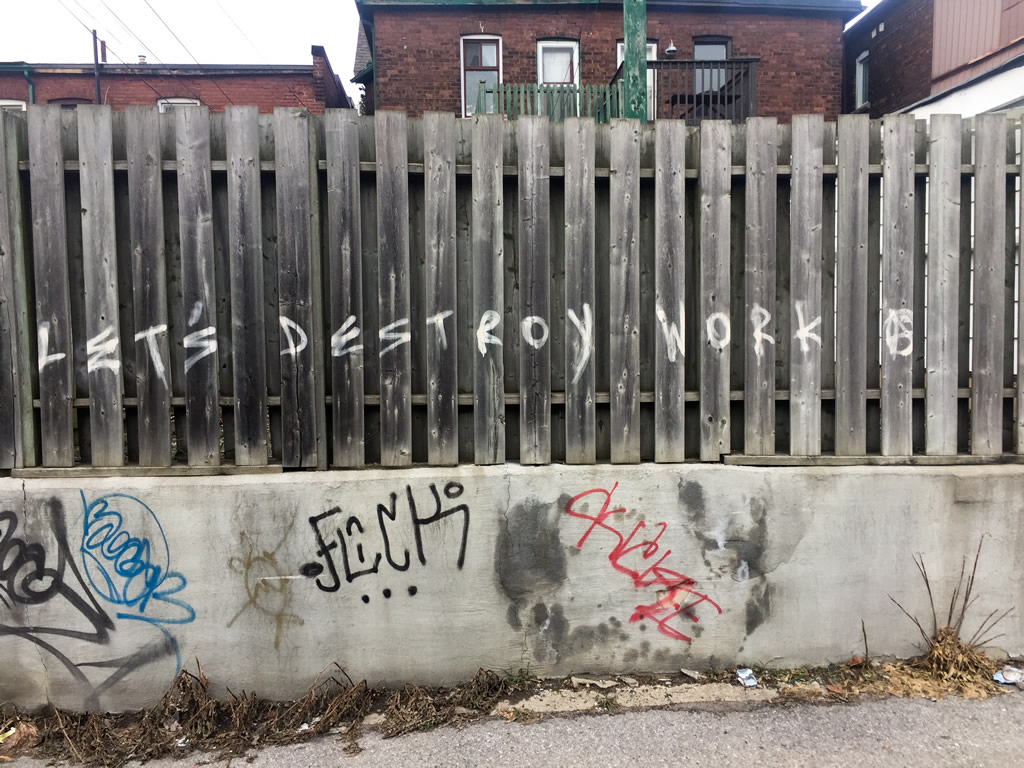 Found January 13th on a fence. Graffiti just says “Let’s Destroy Work”. I have no idea what that was all about. Maybe someone was having a bad day at work ? 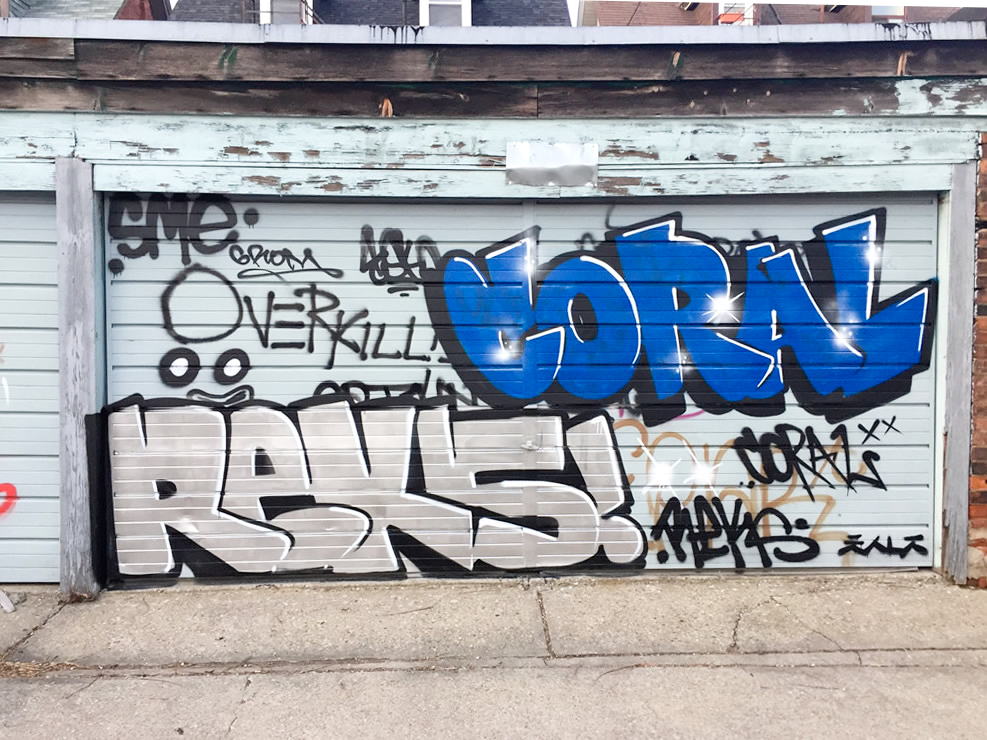 Found January 16th on garage door. This is the type of graffiti that homeowners get upset about. This is what happens if they don’t put a mural on their garage door. Taggers will come and write graffiti like this on the door. If its not cleaned or painted over – more taggers will write more graffiti on it. Its a vicious cycle. 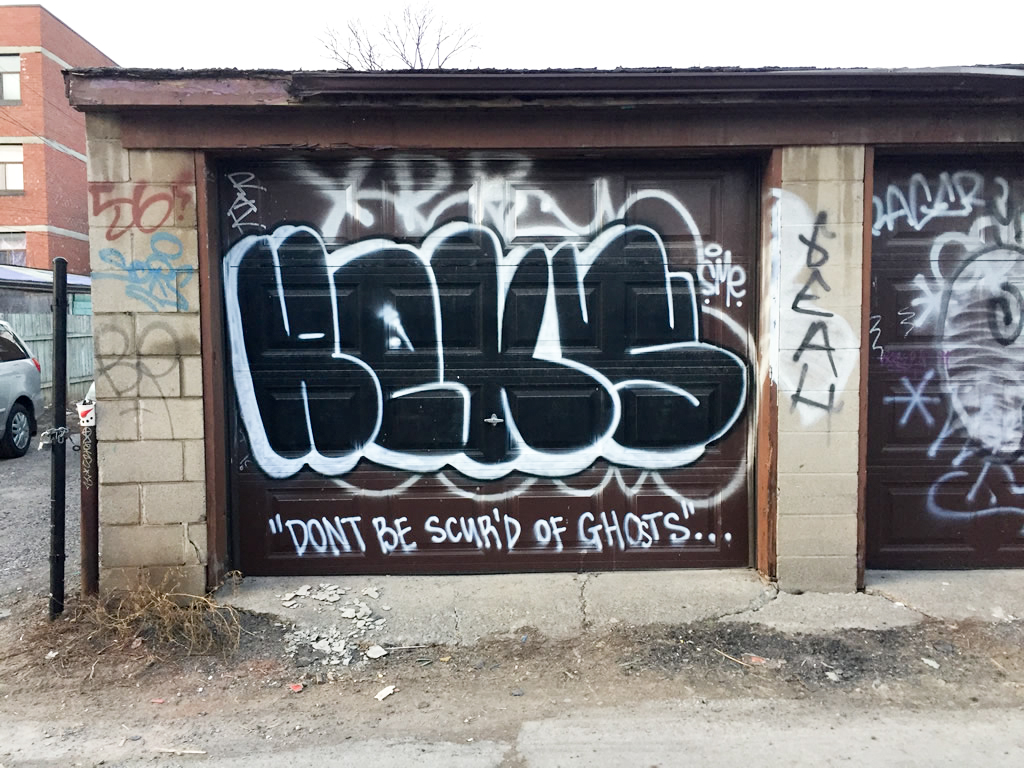 Found January 16th in the same area as the photo above. You can see that tagger “REK5!” has written his tag on both of these garage doors. The graffiti tags could have been written all at the same time or over a period of months. Its hard to say.. the only way to try and prevent this – is of course by painting a mural on the garage door. Some homeowners just leave the graffiti there instead of painting over it. “Don’t Be Scur’d of Ghosts”.. maybe a Ghostbusters reference. 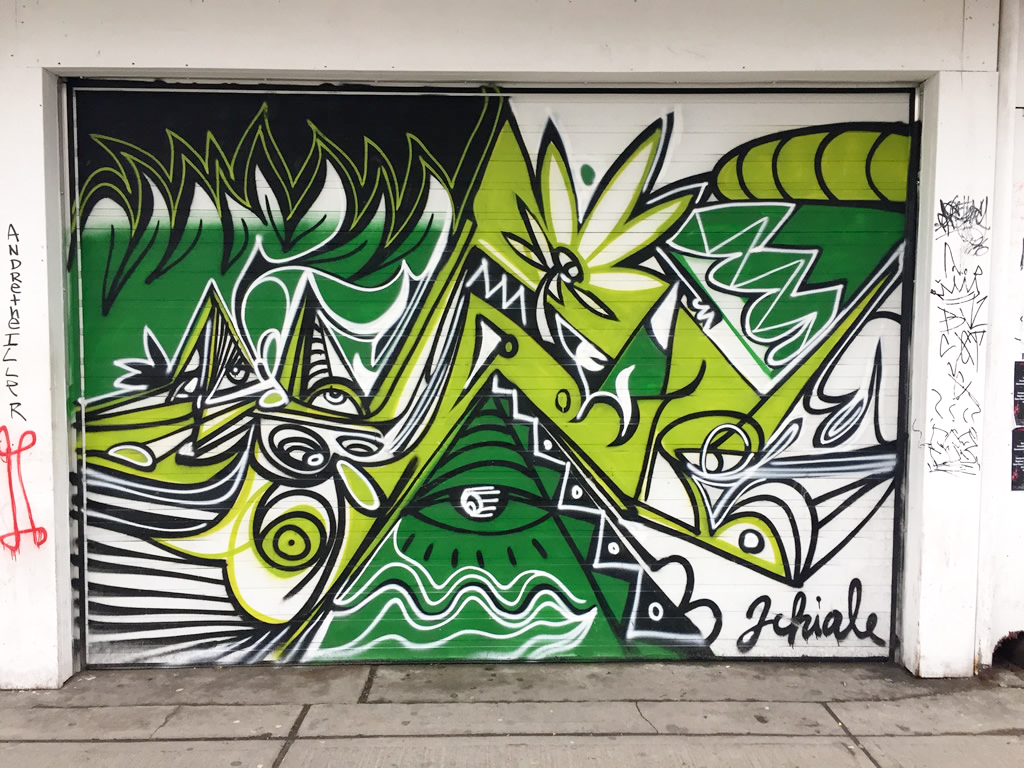 Found January 18th. Artwork by Jimmy Chiale found in the same neighbourhood as the previous garage doors. This is actually a store in Kensington Market – so the owner must have gotten tired of having to paint over the graffiti. Jimmy Chiale paints mostly murals – this the only garage door by him that I seen so far. 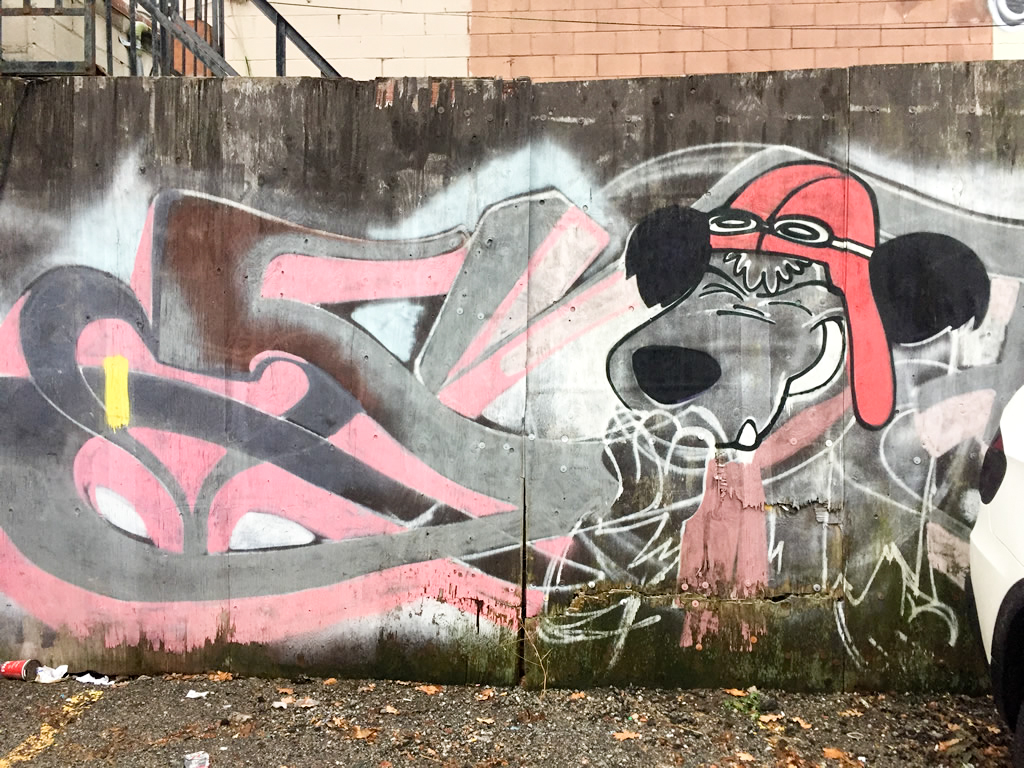 Found January 18th. This like the elephant above and it straddles the line between graffiti and artwork. A fair bit of time has been spent on this artwork. But because there is no signature – that leads me to believe that its not sanctioned.

It might be by Charles Taylor as there was another Snoopy Graffiti character nearby that I posted on my Instagram last year. 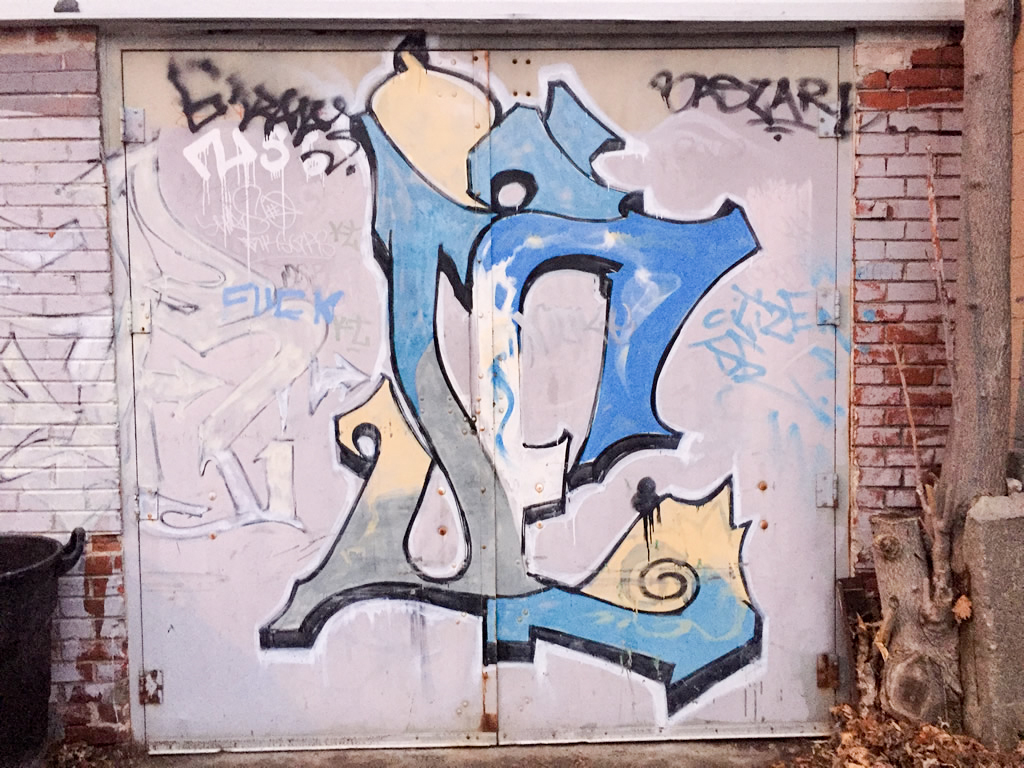 Found January 20th outside the back entrance of a store. I don’t know if that is graffiti or if the store permitted that or not. There is other artwork in the area so anything is possible. 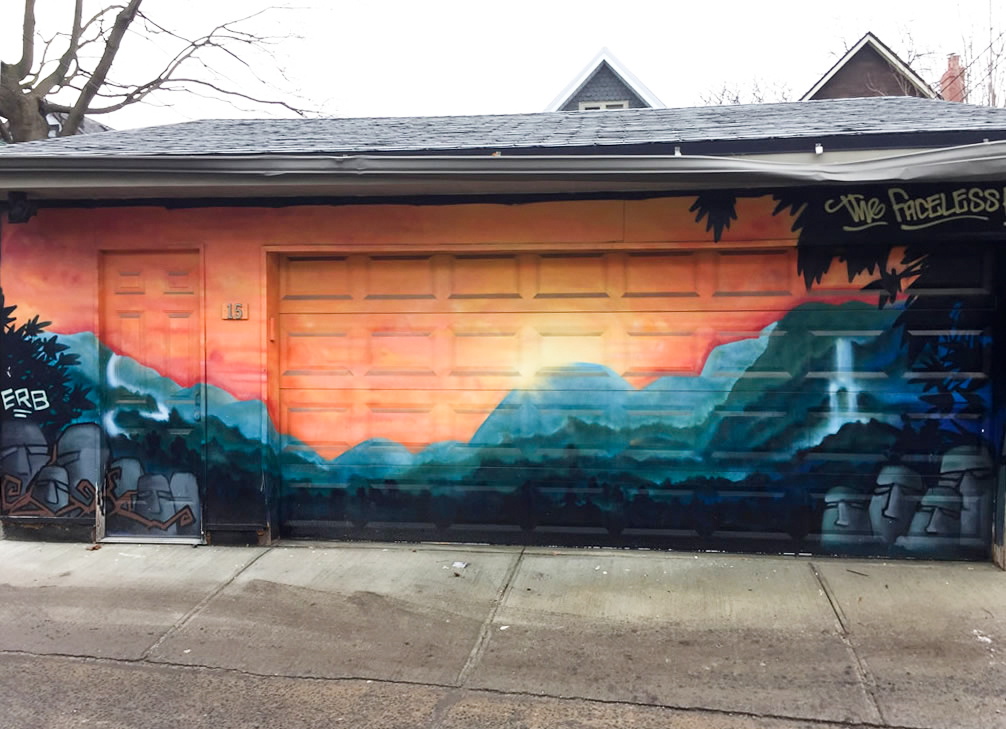 Found January 21st in Roncy. That is in the same alley by some artwork by @nogoodthieves But I can’t be sure if its the same artist or not. It looks to be of a mountain and all those Easter Island heads 🗿 are at the bottom of the mural.

Some purple 🎨 for a very white day today. This is by @nogoodthieves.. I keep forgetting where this alley is . Everytime I find it again — I keep finding more art 🎨.. I dunno why this lane way has so much art it it. But it does… . . This had a car parked in front last time I passed through.. So, it was great to see this city skyline 🎨 unobstructed.. _______. . _____ . #tdot #thankyoutoronto #memoirsoftoronto #viewsfromthe6 #yyz #inside_to #Toronto #Torontolife #blogto #narcity #narcitytoronto #Ontario #Canada #streetsoftoronto #toronto #6ixwalks 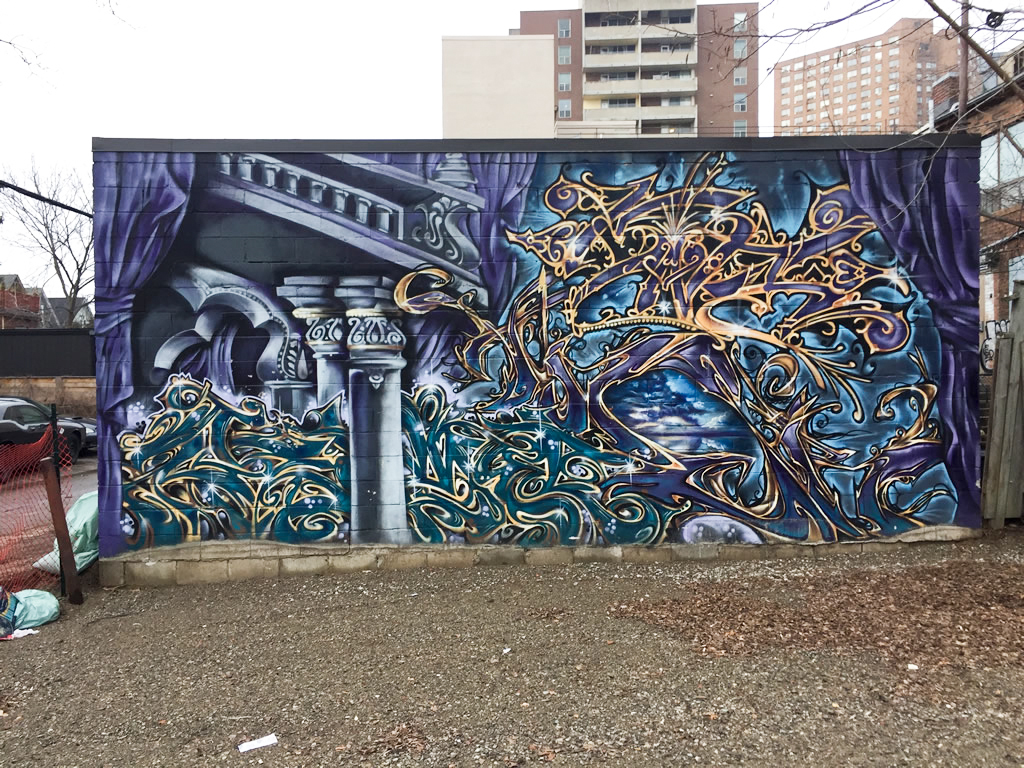 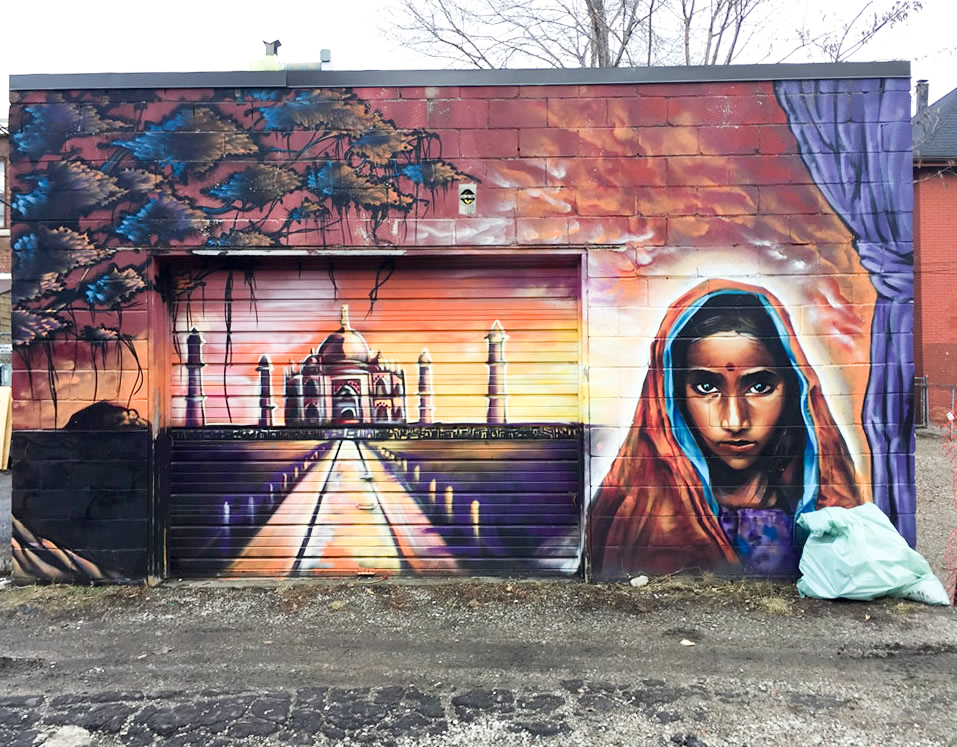 Found January 21st. This is behind a former yoga studio in Roncy. The studio closed more than a year ago. Its unfortunate because they spent a lot on the artwork all around their building. The front has murals and this is located in the back. Again, unknown artist. 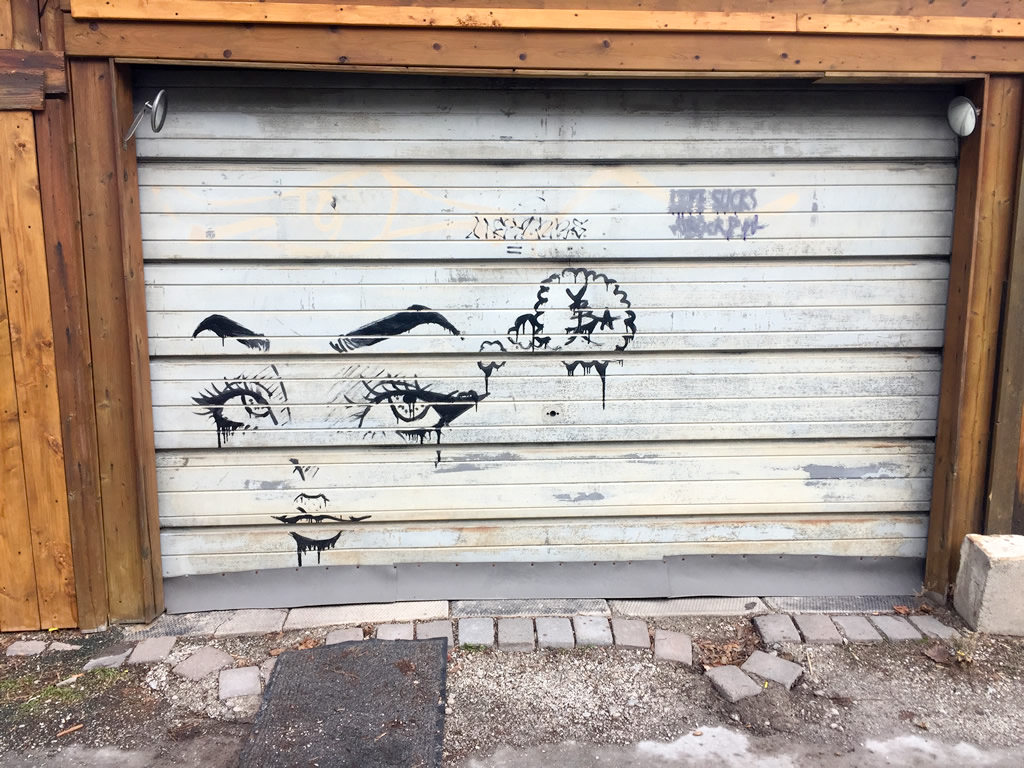 Found January 27th near University of Toronto Athletic centre. This is definitely falling into the graffiti territory. The face is really original though and someone tagged it “Life Sucks” 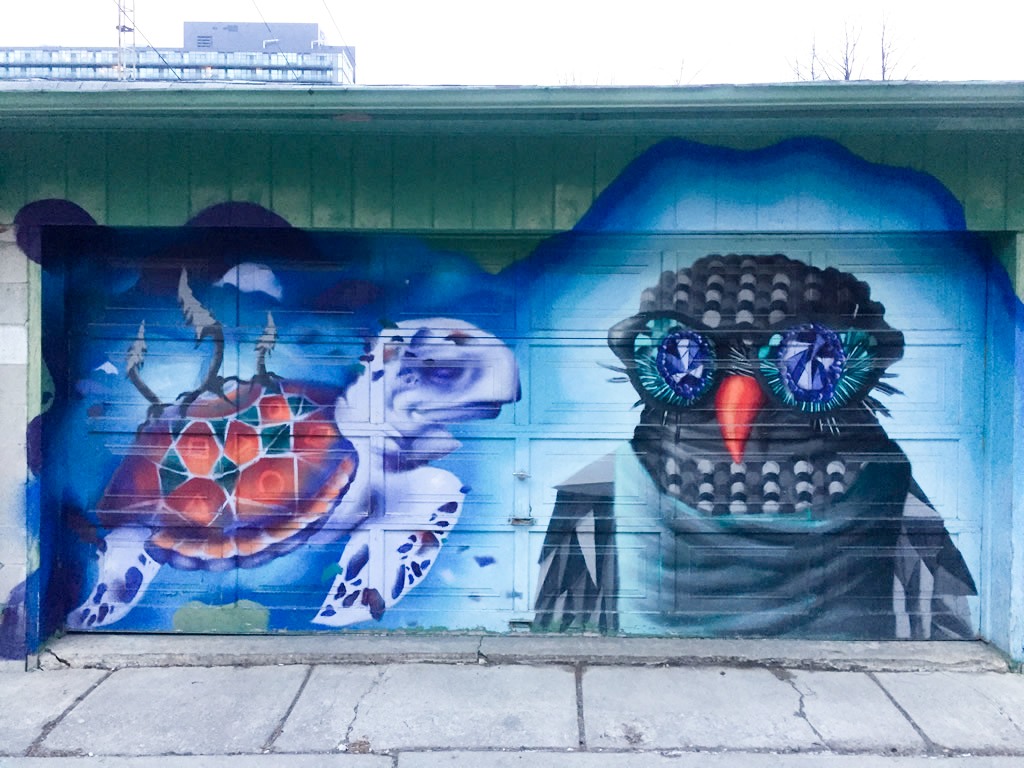 Found January 29th. This garage door mural is by Birdo – aka Jerry Rugg found in alleyway in the west end. This artist has 5 or 6 murals all in the same area. This artwork looks to be a turtle 🐢 and an owl hanging out. 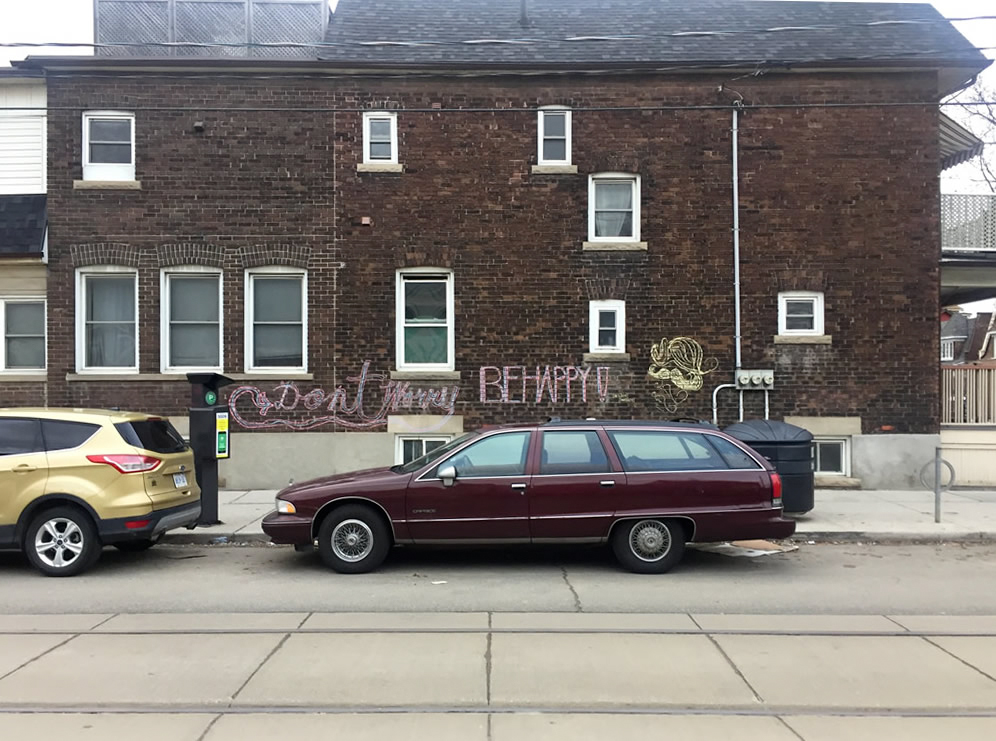 Found January 13th in Roncy. Only throwing this in – because I think its really cute. Someone wrote “Don’t Worry – Be Happy” in chalk on the wall. That of course is a song title by Bobby McFerrin.