Toronto Street Art Graffiti featuring Sticker Slaps Found in January 2017 – plus, some from February. Most by unknown artists with the exception of Fooshwa, Megz238 & Smile. Plus, an advertising sticker graffiti slap by Crop King Seeds. Most are vinyl sticker slaps with exception of a couple of wheat paste throw ups.

Someone on Reddit asked if they can get into trouble for putting up stickers. Someone answered back that it would depend on the area.

I see lots of advertising stickers everywhere and usually they are on things like newspaper boxes or telephone booths. I guess some people would consider this graffiti while others like myself just see it as another form of street art. Art is in the eye of the beholders.

This site offers advice about what is considerable acceptable and what is ‘frowned upon’. . I would agree with everything in that post. The stickers should be visible but not so hideous that they would be considered an eyesore.

Honestly, I don’t think that many people even notice these sticker slaps. You kinda have to be paying attention to even realize that they are even there. 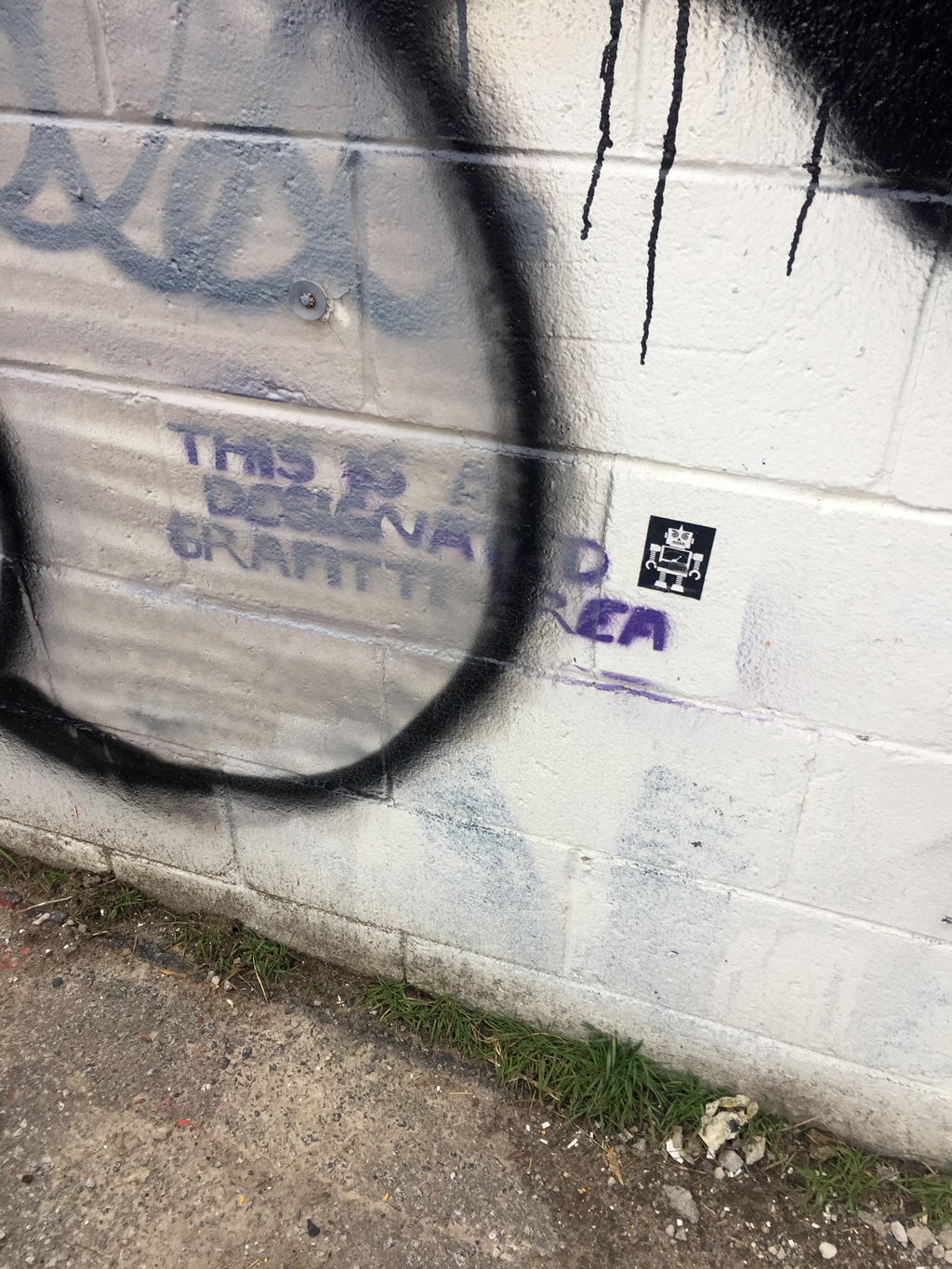 Found that January 13th. I’ve seen that “Designated Graffiti Stencil” in a couple of other spots in the city.

Someone also stuck a Billy Bot sticker slap next to it. I found this on Instagram that was posted in 2014 – looks like the same artist. 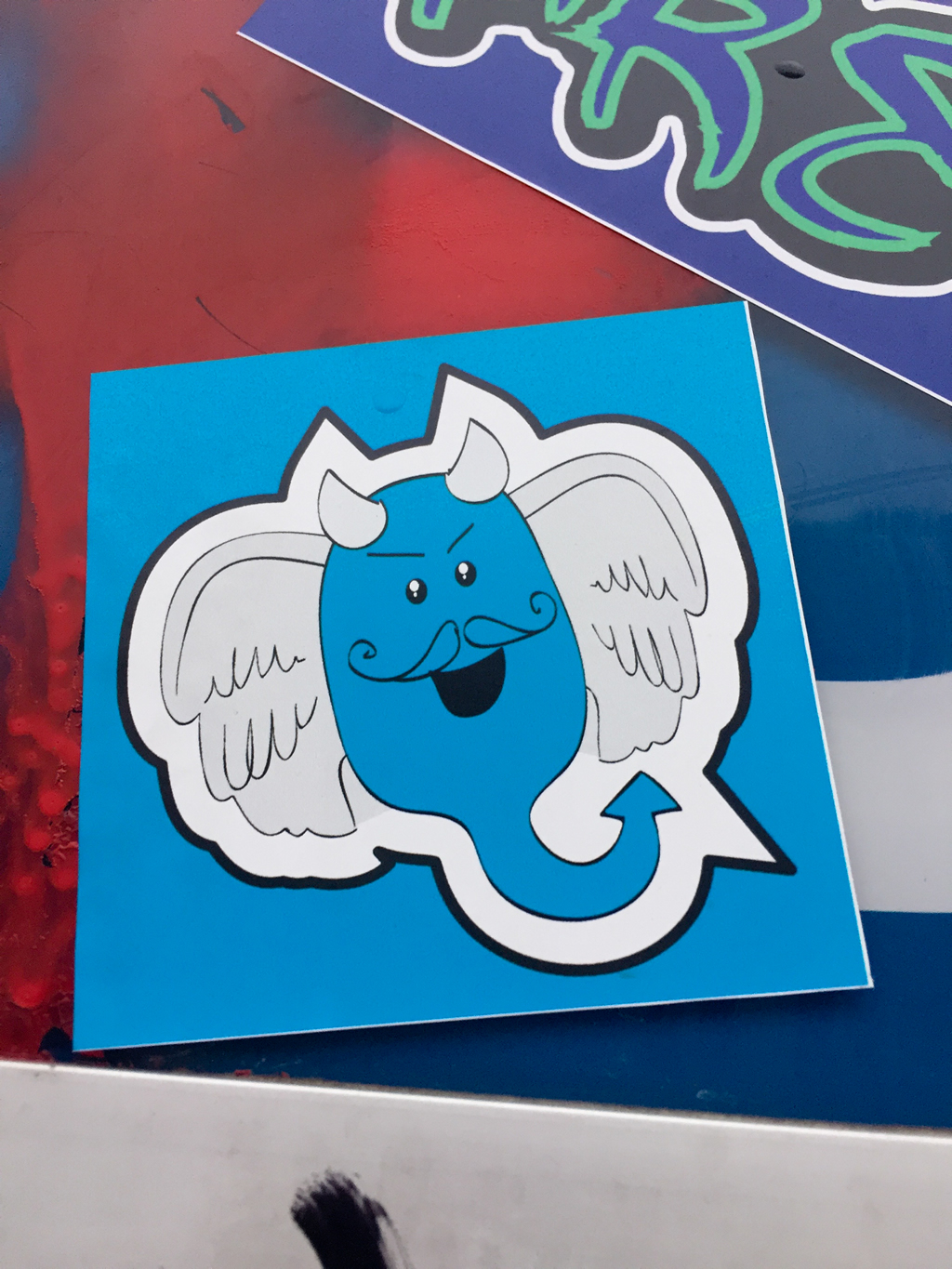 Found that January 18th. I have no idea what that is all about. It looks like a combination of a devil 😈 and an angel 👼. It would make a great emoji 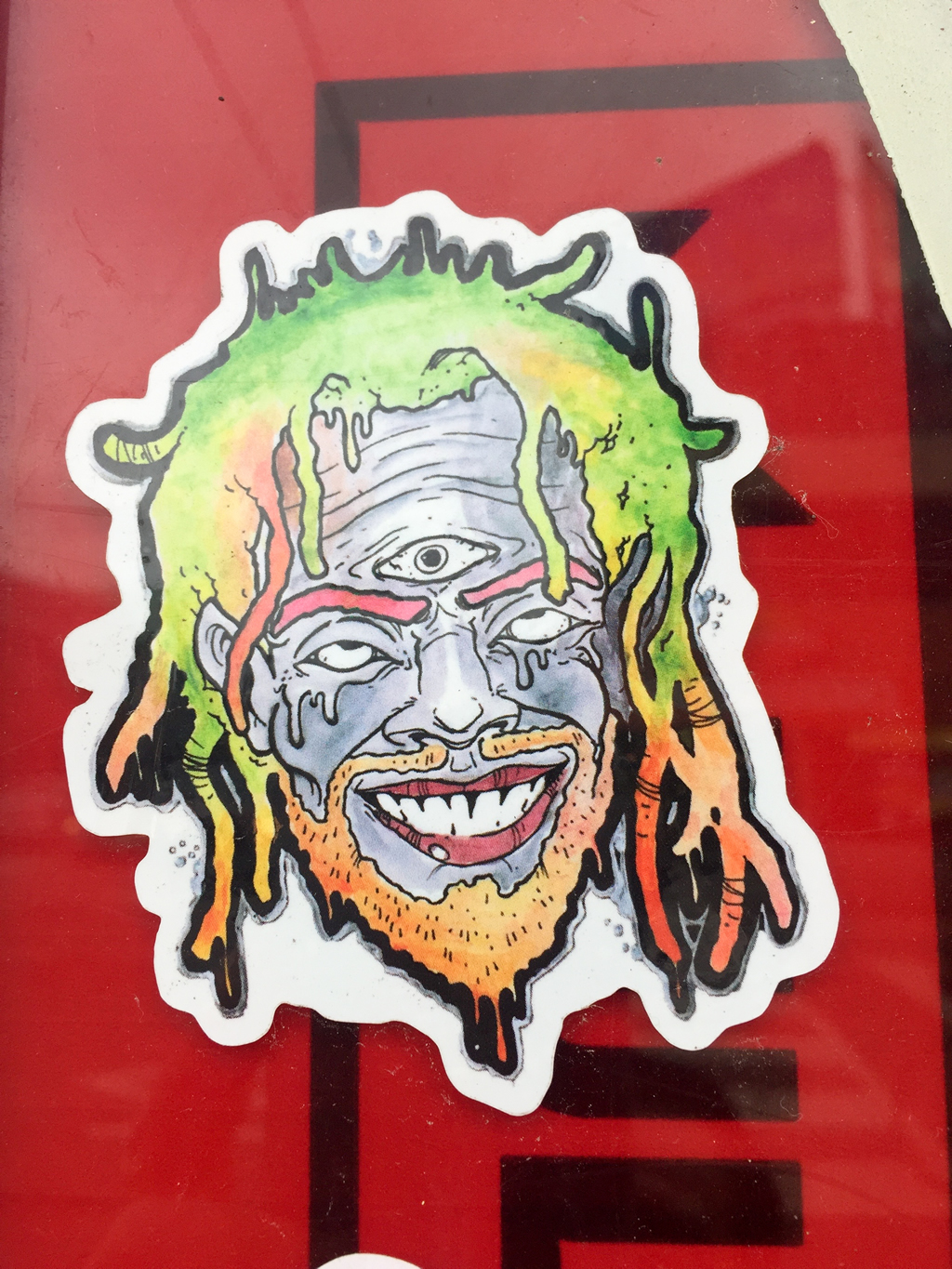 Found that January 26th. Another unknown artist.. I have seen similar designs all around the city to this sticker slap. The face has three eyes with green hair. 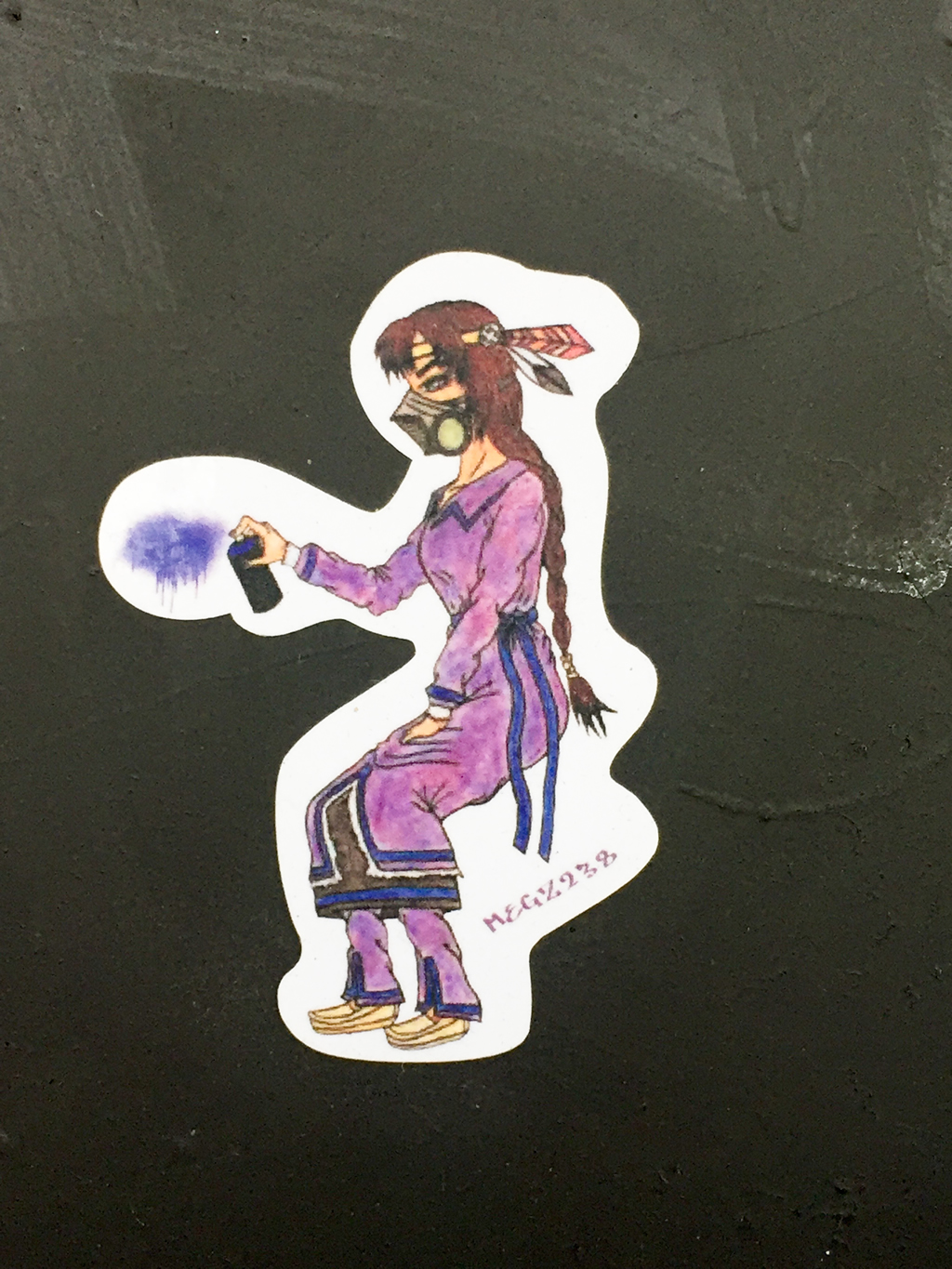 Found that January 26th. This looks to be an Indigenous woman spraying paint like she’s a graffiti artist. I googled that name and found this Facebook page. The page hasn’t been updated in over a year. The Instagram account that they mention doesn’t exist. Maybe they have given up on graffiti ? 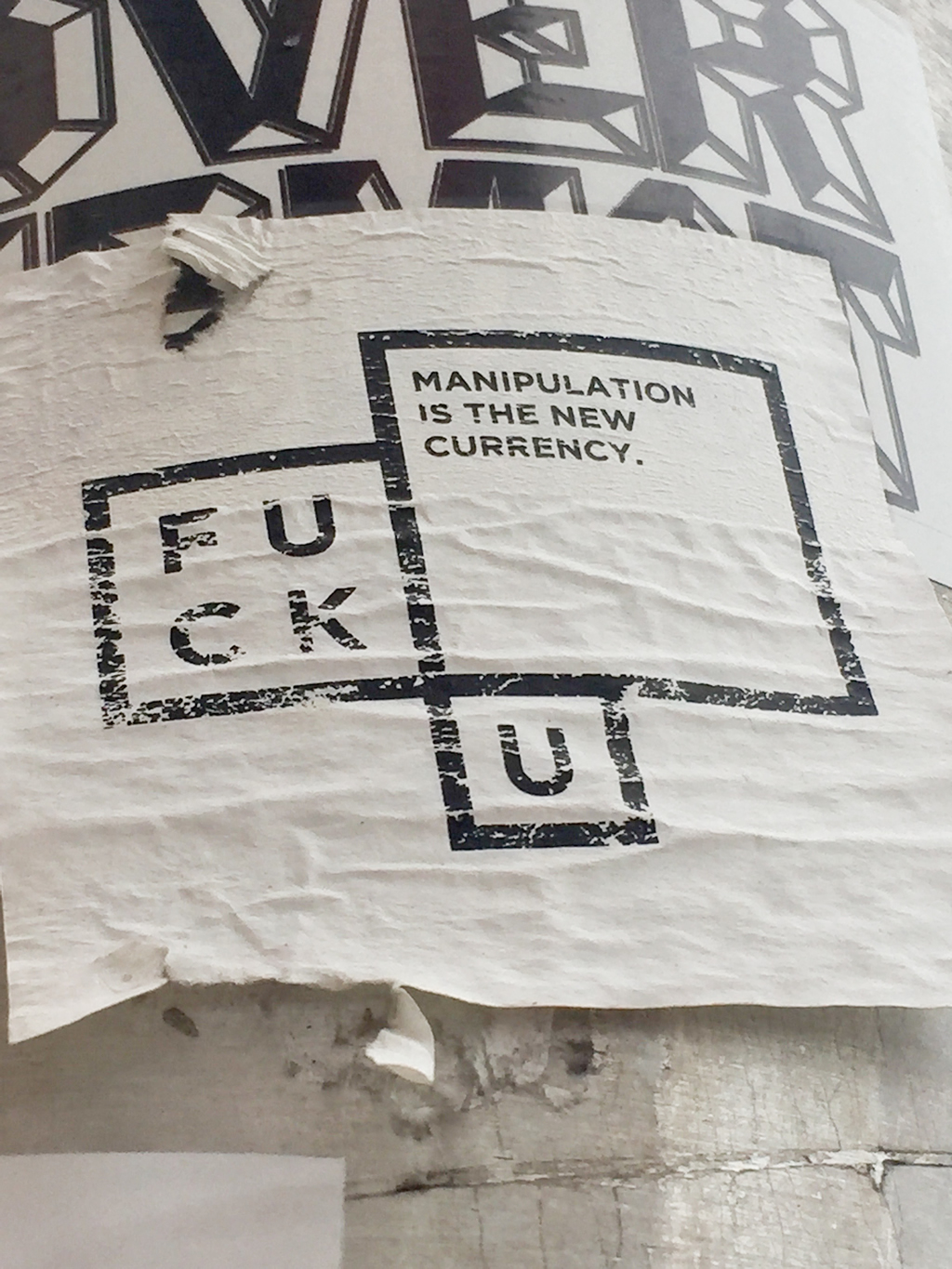 Found that January 26th. Its actually, a wheat paste throw up on top of a sticker slap. It has the letters “FCUK” and “U” with “Manipulation is the new currency”. Have no idea what that graffiti is about either. 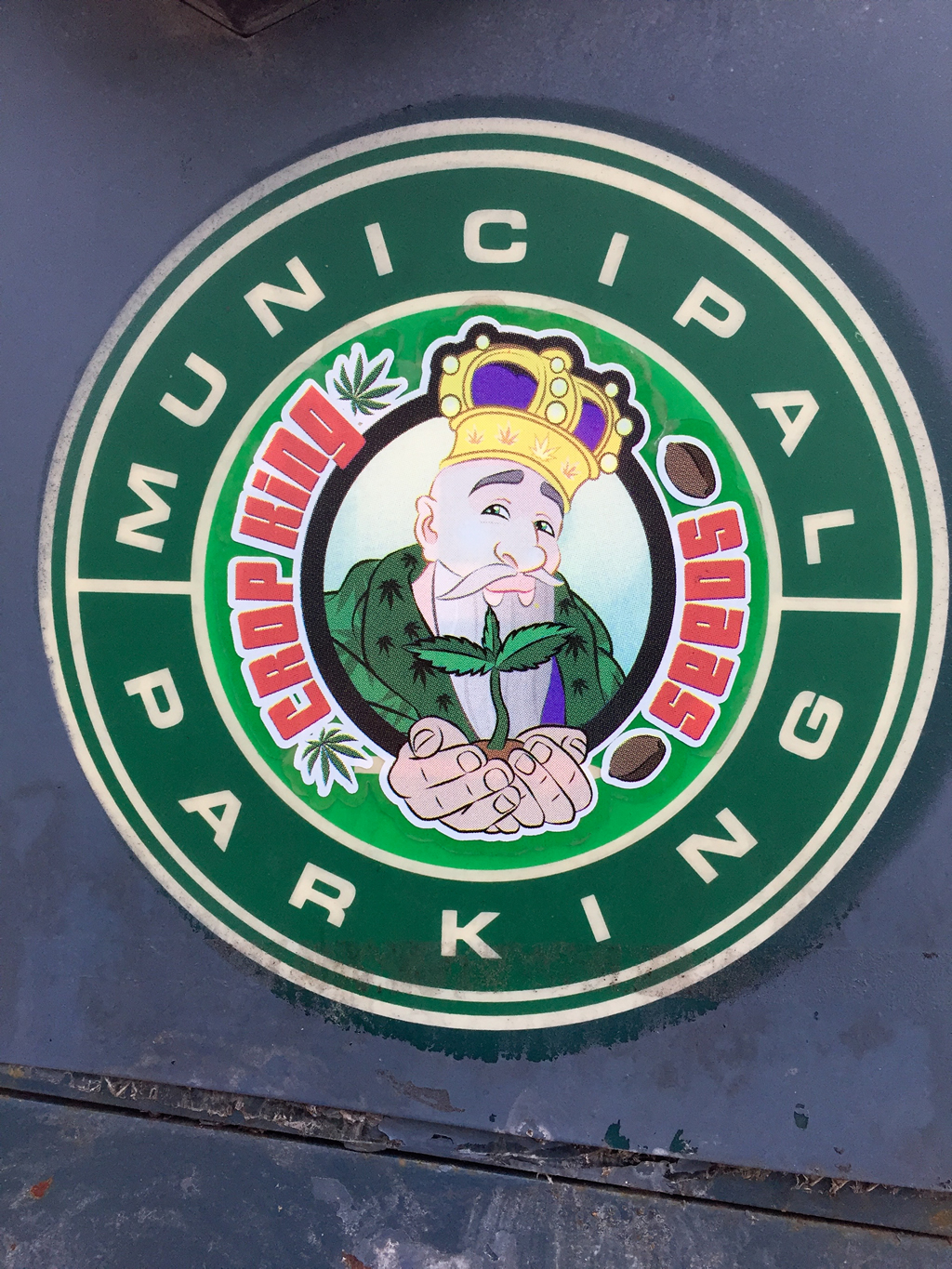 Found that January 26th. I didn’t realize at the time but this isn’t really graffiti – its advertising for Crop King Seeds which according to their site “features 31 of the worlds best marijuana strains for sale ”

Very good placement with this slap – it almost looked like it was apart of the Parking Meter Sign. 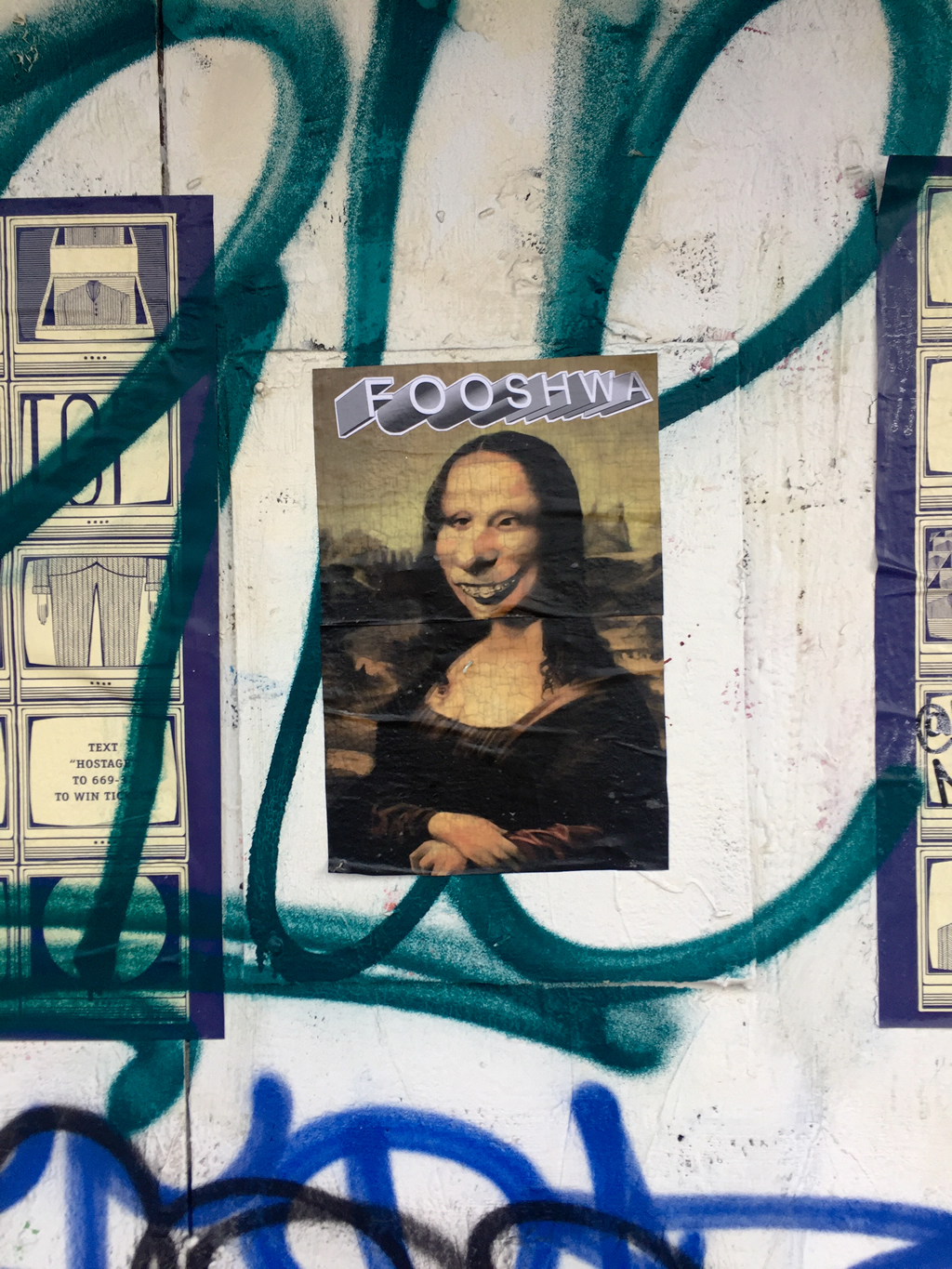 Found that January 27th by John Little @fooshwa. I googled Fooshwa and found out it means having sex with lots of people according the Urban Dictionary. This wheat paste throw up is the Mona Lisa and her smile needs some repair. 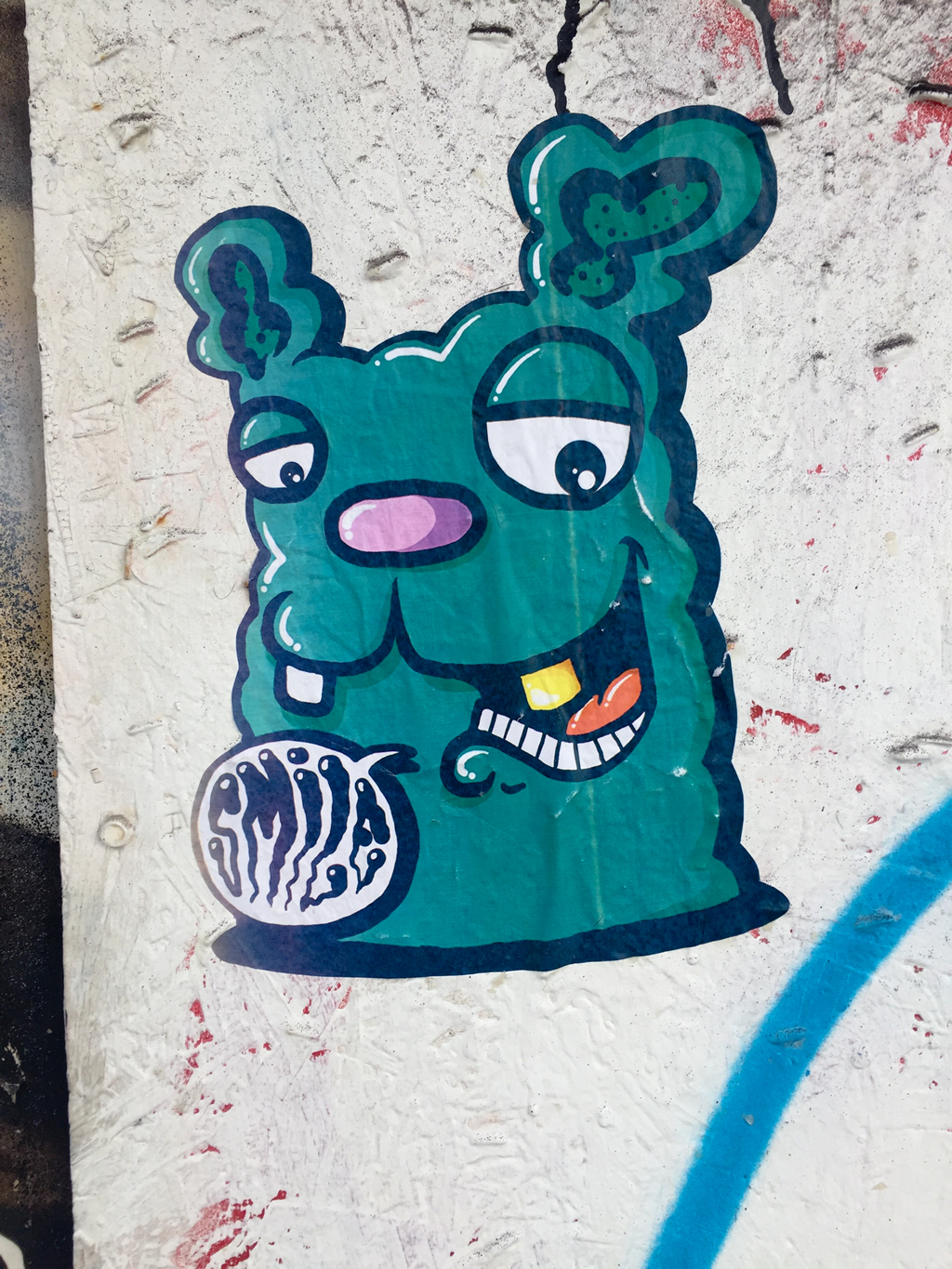 Found that January 27th by Smile Please @sm111le. Think they are based out of Germany. From their Instagram account “Smile me a river.. Smile me to the moon..”. They have a Facebook page as well.

Refuse to Live Under Inhumane Conditions 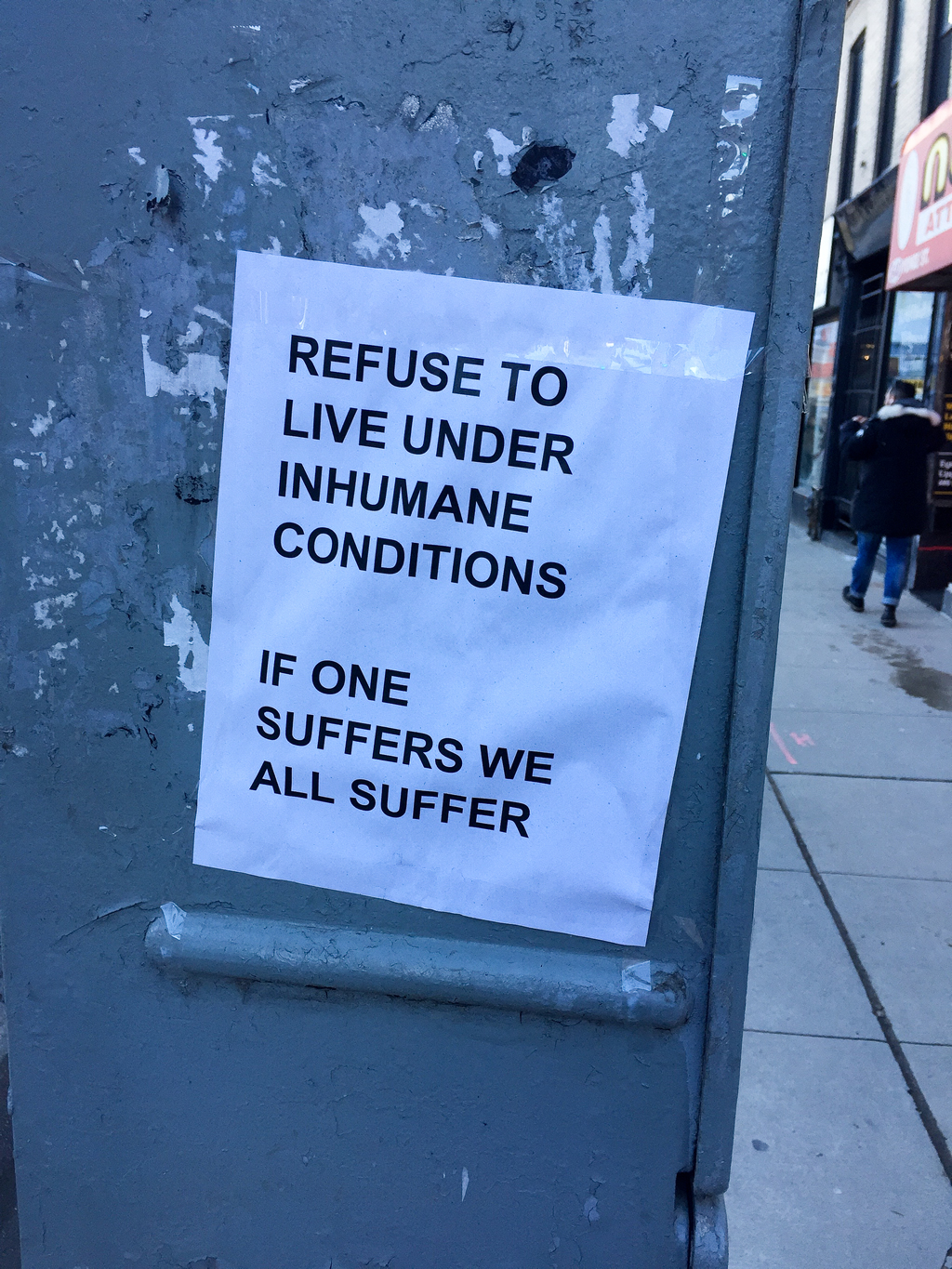 Found that February 1st. Its not really a sticker slap or a wheat paste throw up graffiti tag. I just liked it because of the message: “Refuse to live under inhumane conditions. If one suffers we all suffer”. That was on the busiest street in Toronto 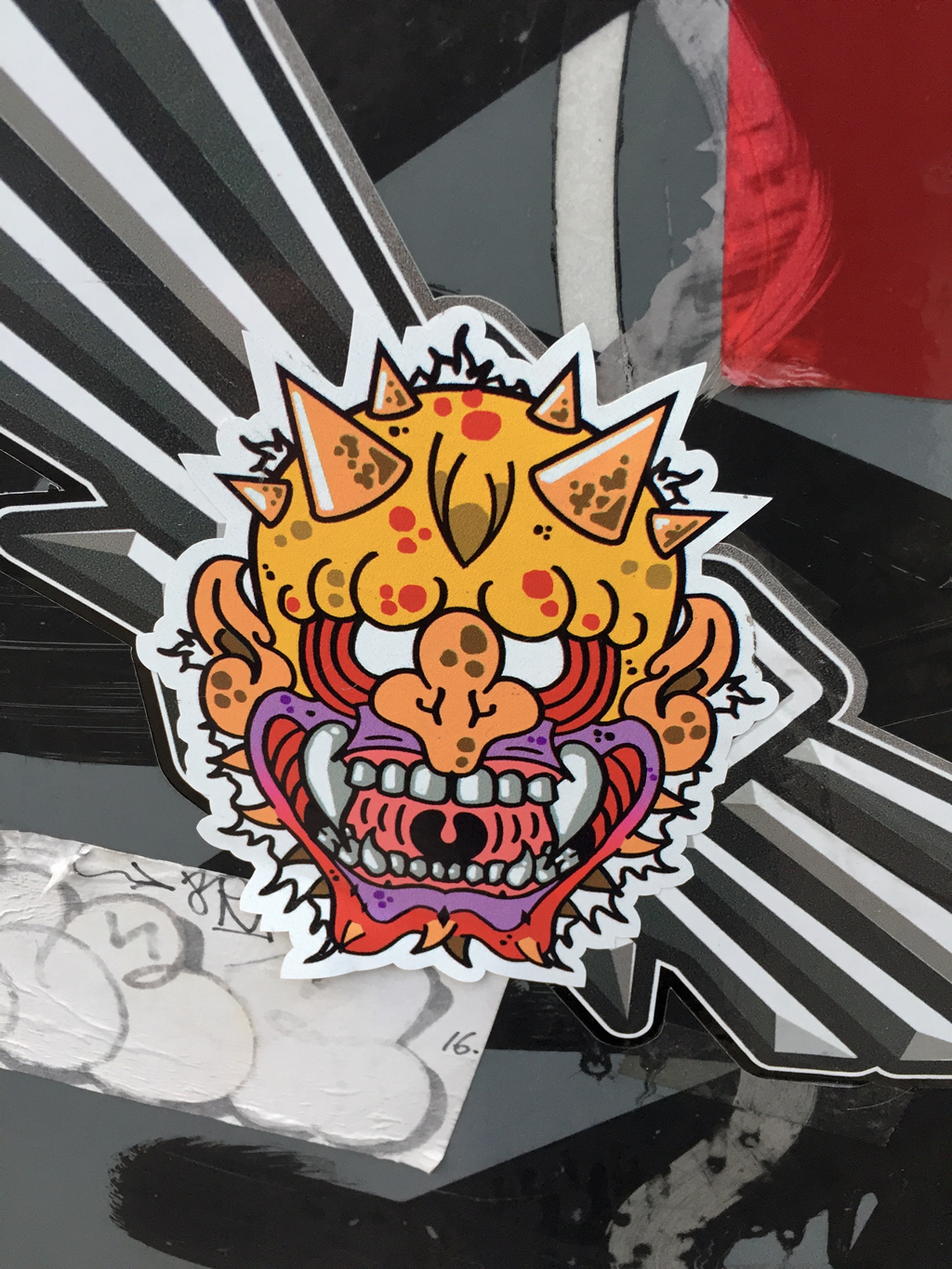 Found that February 1st and it looks similar to me like the one I posted above of the head with 3 eyes. Lots of neon colors going on. I have no idea who this is by either. 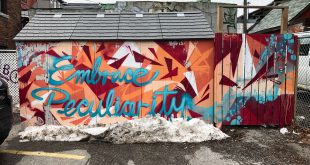 Kizmet32 Truck Graffiti Found another Kizmet32 truck out in the wild. Not sure if it …